Note: Some of the circuits have been simplified for understanding the theory of operation.

Since the 1960's, there has been a shift towards reducing the number of wires in a cable used for audio and transmitter control. (mic cable)

Many years ago there were at least three and sometimes four wires used to control a transceiver from a handheld microphone. Notably, PTT (push-to-talk, or press-to-talk) and ground, and a microphone audio line and shield.

A transmitter is a unit that generates an RF signal when power and control are applied, along with a microphone if audio is to be used.

A transceiver is a system that contains a transmitter, receiver, antenna control and power supply, and a method of switching from receive to transmit.

PTT refers to "push-to-talk or press-to-talk". When an operator pushes the button on a hand held microphone or "walkie talkie" as shown below, the transceiver switches from receive to transmit. The button is referred to as a PTT button. 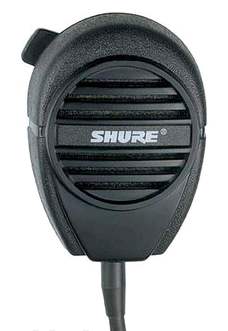 With the advent of miniaturization and minimizing of wires, the control circuitry is modified by combining the PTT line with audio thus eliminating one or two wires.

This page will show in theory how this is accomplished.

First an explanation of different types of microphone elements.

The simplest and oldest is a carbon button element. This is a rugged and reliable type. A small chamber contains two electrodes and a small amount of carbon granules. Electrodes are attached to a diaphragm and the cup holding the granules. When speaking into the microphone, the diaphragm vibrates with the sound waves and the carbon granules vibrate with the audio energy. Since carbon is conductive, a varying amount of resistance occurs across the electrodes in relation to the audio energy from a voice. They were found in many conventional land (telephone company) phones notably Bell System type phones. They are still common in aircraft radios because of their ruggedness, reliability, and the ability to reduce background noise. By applying a little voltage called bias through a resistor and across the microphone element, an audio wave is created across the resistor. This waveform is passed on to the next audio stage.

During the1960's, dynamic or magnetic elements were developed. This was basically a moving coil attached to the diaphragm surrounding a magnet. As the coil moves with audio energy, a small amount of electrical energy is created. A drawback is the need for amplification usually in the microphone itself.

Some other types of microphones consisted of a crystal or ceramic elements. These were sensitive but fragile and couldn't tolerate excessive shock or temperatures. These types of elements are almost obsolete.

Sometime around the late 1970's, electret condenser elements were developed. These were small condenser microphones with a miniature amplifier inside the element. Obviously these had to derive power from the transmitter audio stage in order to function. Some had a small battery in the microphone case which would last a few years. A more detailed description of electret mics can be seen here.

The circuit below shows how a conventional handheld PTT circuit operates:

The following circuit shows in theory how a single line is used to pass audio and enable the transmitter. Also shown is what a typical speaker/mic circuit looks like.

Keep in mind that some of the non-supporting components have been left out. Active components show basic operation.

The above circuit is used throughout the communications industry such as police and fire department radios, taxi radios, amateur radios, and other general purpose FM type transceivers. The mic element and SW1, and optional speaker are the only components in the remote handheld mic so only two wires are needed. Audio/control, and ground (and optional speaker).

As you can see, when the PTT button is pressed, a circuit is completed and the audio/control line voltage between R1 and R2 drops from the power supply level to a voltage of approximately 2 to 5 volts. The transistor Q1 senses this drop, switches on, and activates the relay K1 which activates the transmitter. Audio is varied on the same line and is amplified and sent to the modulation circuit of the transmitter. C1 blocks any DC voltage to the next stage.

Knowing how this works, it is possible to modify external equipment that has separate audio and control lines to activate a single line PTT circuit.

The following are examples of interfacing external equipment to single line control transceivers and vise versa.

This type of circuit is commonly used in data transmissions such as Packet TNC modems into a walkie talkie. When in standby the "single line transmit" line sits at the power supply voltage. When the keying line goes high, the collector of Q1 goes close to ground. This is sensed by the control/audio input line in the transceiver and switches the transmitter on. Audio going through C1, R1, and C2 is superimposed on the same "single line transmit" line. Figure B can be swapped for the circuit within the dotted line box in Figure A.